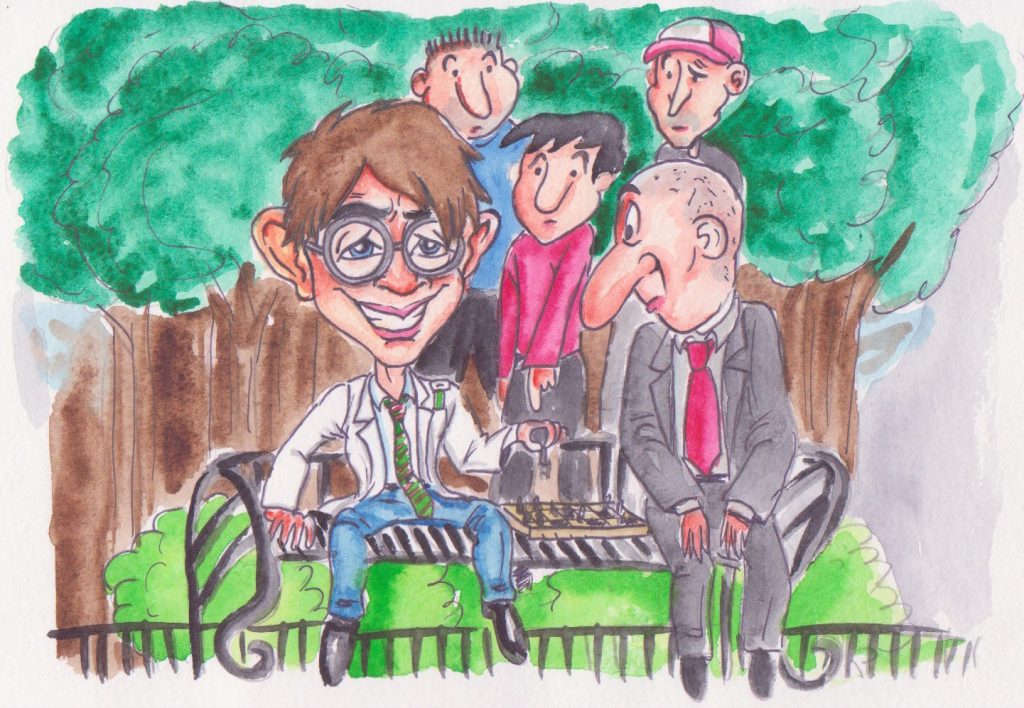 It was a sunny day so Tomas decided to go for a walk in the park. After a short break on a bench, he felt refresh and a need for new mind challenges emerge. He went to the open chess tables. The chess players in the park were usually people not doing well in life. You can call them losers but they have devoted their lives to the game of chess which they claimed is “the game of all games” and that it has real-life applications in politics, war, and business.

It was strange that no professional chess player was ever good in something else except other games.

Tomas finds a free semi-professional chess opponent and they started to play. At the begging Tomas was doing pretty well but then kibitzers gathered around the table. These kibitzers were discussing the game in a loud voice and they were giving their unwanted advice which were varying from good to terrible. Tomas got annoyed and he eventually lost the game.

“Dam you fucking kibitzers”: Thomas thought to himself “I should stick to the online chess”

He stood up a saw another chess table full of kibitzers. But these kibitzers were different – they were quite. Tomas got closer and saw that the chess players on that table were playing for money. Thomas went home and that evening only kibitzer’s thoughts were in his head. And he started to make parallels between chess, politics and modernity problems:

What is the one thing that I really hate about our modern times – it is called politics. But why I hate politics so much:

So the system is broken and it is not that some countries are doing it wrong. It is all over the world.

You are given the right to choose from the same kind of dirty and mean people. There may be some exceptions here and there but eventually, the system kicks them out or assimilates them. Eventually, you do not chose ideas or politics you chose only dirty people to govern you.

Why are we here?

Let’s revise how it was:

Democracy was born in ancient Greece. There were relatively small and independent city-states, the decisions were made via voting from all those who have rights. The voting process was simple and personal and it was conducted at a public place where all the voters were gathered and everyone was able to see everyone while voting.

As the counties become bigger and bigger we had to invent institutions like Parliament, Senate, Chamber, and Party and eventually the current voting process.

But why is modern democracy so different from back then? I’ve got three things for you:

The big is different from the small

This may sound obvious but is it a very deep problem that needs a whole new article.

It is the way how important decisions are been made. Another huge topic.

Finally, we got to the kibitzers. You know kibitzers: anonymous people that are giving unwanted advice without betting anything.  It looks like we are surrounded by them – politicians, business consultants, journalists, non-government organizations and so on. But let’s stick to the political domain.

Modern politics is the opposite of money-chess-game in the park. Here the kibitzers are making all the decisions and they are betting your tax-money. Other kibitzers called journalists are discussing and communicating the decisions made by the first group of kibitzers. The biggest problem is that we are all becoming kibitzers but only for a very short period of time – when talking about politics in the pub and when voting on elections (remember: anonymous people that are giving unwanted advice without betting anything).

People in the park have an inner understanding that kibitzers should never be given the right to speak. Now try to silence a politician or a journalist and the whole world will understand how nondemocratic you are.

It is just that “Representatives become Kibitzers”.

So the problems that are mentioned are defined way better and broadly by N.N.Taleb. All I did was to put them in the context and hopefully to get your attention on them.

Defining the problem and asking the right questions is far more important than giving solutions and answers coz good answers and solutions may change over time but important questions never change.

We are in the information era and with the help of the Internet, we can communicate instantly.

Why not create a political Party where its politician will have only one job…. to ask proper questions. And that is a very hard job. On the other side, all party members will vote personally meaning that everyone can review what others have voted. Then the politicians will just vote what their party members have voted in the Parliament/Senate. Let focus on battles of ideas within a Party and not on battles between individuals or Parties.

Anonymity leads to reckless decisions. If you really believe in something you should stand up with your name at least.

In this complicated world “not knowing” is not a sin so quorums should be really low or should be removed. Vote only if you know it is right or you deeply believe in it and you are willing to put your name on it.

The quality of the decisions made by the voters should be reviewed and appraised by the very same voters. People making constantly bad decisions should be penalized (like banning them from the voting process for a period of time).

In this kind of decision-making-voting process, I would like to participate – personal, transparent and without kibitzers.

Executing this idea in an online platform should be a hard task. A lot of details have to be taken under consideration and the idea has to be polished. One thing is certain:

If someone creates such a system I shall definitely use it.